This video is much racier and sleeker than the previous montage vid I posted; more sound effects and video clips.

I made this video-audio mash-up during my dissertation defense back in March 2012 to serve as an example of Obama’s “cute” rhetoric in his roasting of Donald Trump at the White House Press Correspondents Dinner.

This video of Obama’s roast with the overlay of his bin Laden announcement demonstrates his uncanny sense of aptum. Obama’s expert use of zingers appropriately encompasses the ridiculousness of Trump’s demands that he produce a long-form birth certificate to prove the merit of a Black presidency. Because of Obama’s easy command of popular slang, central features of his communicative style, Obama’s political success is well documented. Yet his virtuosity with African American speech performances proves not only insufficient for solving America’s racial problems but paradoxically provides Obama with all the right moves of sounding as though he’s speaking candidly to Black folk, while in actuality communicating a whole lot of nothin’ to the political mainstream about the mainstream problem of white supremacy that results in anti-Black discrimination. Beyond Obama’s AAE as LWC fluency, the double move of using hip-hop to conservative ends is made possible by what Alim and Smitherman refer to as “white audiences’ ineptitude” at registering the nuances of AAE . This is especially true when AAE rhetorical tactics of circumlocution are deployed to disarm white and, at times hostile, listeners. I take issue with unequivocal compliments for Barack Obama’s political savvy and excuses made for his tendency to give “a little to both sides” when discussing racially sensitive issues (Alim 129). Admiration for the ethics of Obama’s rhetoric should be held back when questionably applied as in certain cases.

Given just hours prior to the announcement of the death of Osama bin Laden, we can retrospectively realize Obama’s roasting was concurrently orchestrated at the time of bin Laden’s killing. At a time when his approval ratings were low, the drop in public opinion was incurred at least partially through the relentless allegations made by the distinctly reactionary “birther” contingent within the Tea Party activist wing of the Republican party.  Regarding the integrity of the president’s citizenship, Obama’s signifying snaps were in response to the bombastic demands made by Donald Trump. Obama disses “The Don” because of his proximity to hip-hop and successfully lumps Trump with the lunatic fringe of conspiracy theorists, some of whom insist the government faked the moon landing and believe there’s a space alien cover-up in Roswell. To draw that link would have been funny enough, but the real punch-line is when Obama aligns Trump with conspiracists who believe iconic rappers, Tupac Shakur and Biggie Smalls are still alive. Obama’s LWC dialect meshes with certain paralinguistic markers through non-speech signals associated with AAE, lip-biting and eye-cutting, even a little teeth-sucking (Rickford 170). These gestures, familiar to almost all African Americans, is an unknown communicative behavior for the predominantly white audience. In so doing, Obama paints the hotel proprietor as a buffoon still further w Obama feigns praise for Trump’s supposed magnanimity and leadership for sparing Atlanta-based hip-hopper, Lil John after the men’s team failed a celebrity cooking challenge by refusing to fire the rap music producer/hype-man during an episode of Celebrity Apprentice. Even though the president had madd jokes for Trump (At one point Obama mock confesses at one point how the gravity of possibly having to fire Lil John would reasonably cause sleep deprivation), all the while actually staying up all night sleep as he plotted bin Laden’s assassination. In this instance, Obama looks in Trump’s direction while biting his lower lip and diagonally sweeping his gaze away from Trump in mock admiration and wisecracks, “But you, Mr. Trump, recognized that the real problem was a lack of leadership. And so ultimately, you didn’t blame Lil’ Jon or Meatloaf.” For good measure, with just the slightest hint of the suck-teeth Obama adds that Trump instead, “fired Gary Busey.”

Not more than 24 hours later after announcing bin Laden’s death, Obama delivers the news in a tone that is somber yet resolved. When viewed in conjunction, these two oratorical performances demonstrate unequivocally Obama’s ability to rhetorically balance pop-cultural frivolity with the ceremonial tones of a wartime speech, in which he must gauge his language when speaking to Americans about matters of urgent import or fleeting absurdity.

The linguistic assertions made by Obama reveal a two-pronged effect of his rhetoric that impact how he is received as a national leader insofar as he accepts the hegemony of white privilege and its resultant patterns of discrimination aimed at people of color. From this perspective, Obama’s AAE merely co-articulates white supremacist thinking, including post-racial conceits held by the “color-blind” constituency of white swing voters to create ambivalent ethical effects. Using the rhythms and commonplaces of AAE in response to highly racialized communication contexts has been Obama’s major strategy for handling voters. More specifically (and even more pointedly), Obama comforts white trepidations about his favoritism toward African Americans and other racial minorities through AAE.

For most African Americans – whether child or adult – not even the cuteness of a cherubic face and genuine innocence could provide refuge from the legal persecution or casual viciousness of white racism. The Florida Tourism Board’s practice of distributing these “alligator bait” postcards (well into the 20th century) speaks to this issue most profoundly. It is probably fair to argue that these images would have never been interrogated up until this point if it had not been for the intervention of African American visual rhetors who sought to reverse the inhumane effects of American US racism. 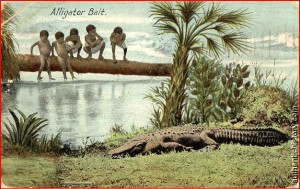 By the time the United States was founded, Africans enslaved in America were forced by physical and legal sanction to watch their every word and action for fear of punishment or death. This is important to contrast this with the fact that whites, on the other hand, had complete freedom – were actually encouraged – to reveal their vilest racial feelings. The need to express the slightest decorum for the expression of racist opinions was non-existent – least of all in the public square. During slavery and Jim Crow it was a commonplace assumption made by many whites that no black could be trusted – not even with the knowledge of the alphabet. Therefore, it should come as no surprise that anyone who was considered black, no matter what, was subject to being demonized and treated accordingly. As a matter of basic everyday existence, blacks were to be denied the fundamental virtue of innocence from the cradle to the grave. Any public injunction by American courts for the forthright expressions of racist behaviors and practices was not to occur for many decades. This issue continues to haunt black existence. 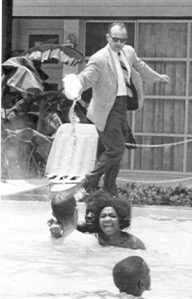 Fast forward to June 1964, when a group of black and white protesters sought to integrate a public recreational space by jumping into the swimming pool at the Monson Motel in St. Augustine, Florida. As difficult as it may be to imagine today, the owner responded by pouring muriatic acid into the pool, endangering the lives of peacefully frolicking demonstrators. Luckily, a photograph of this heinous incident was captured and broadcasted around the world.This photo has since become among the most famous images from the Civil Rights Movement.

A few years ago Brian Owens, an Orlando based sculptor, was commissioned to commemorate the historic event and pay homage to the brave citizens who risked their lives for equality and a refreshing swim on a hot Florida day. Entitled, “St. Augustine Foot Soldiers,” here is a picture of the memorial sculpture, which rests today in the heart of the town square. 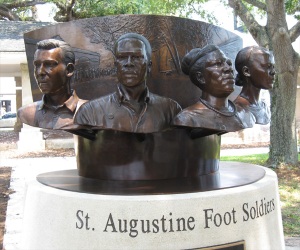 Carrying on a proud legacy is something Owens knows a lot about, as he is the son of the late African American graphic illustrator and portraitist, Carl Owens.  Here is a link to Brian Owens’s flicker stream showing the process behind his painstaking craft.

One rhetoric of cuteness is expressed through the sentimentality of the New Year.  Of  course, I’m talking about the symbolism of Baby New Year, which is representational of new beginnings and future possibilities. Somehow most (if not all) of us subscribe to the false linearity of this “hit refresh” chronology.  You know, something like a perpetual reset button. 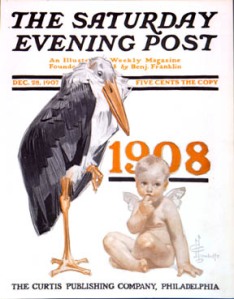 I think this temporal aspect of cute rhetoric can be understood by looking at the spatial conceptualizations laid out by Henri Lefebvre in The Production of Space. According to Lefebvre, social spaces give rise to time spent as social production. This relationship happens so readily that an ostensibly obvious relationship between where we are when we are/were/have been doing something easily lends itself to a tautological frame. As I see it, this a/cute rhetoric of an annual “new year” forecloses on notions of space as arenas of revolutionary production by enclosing our cortical and tactile perceptions of spatial arrangements in such a way that our day-to-day practices actually seem as though they can be readily controlled (and thereby, ultimately predicted).

This workaday rhetoric is expressed through our bodily interactions and “[r]epresentations of the relations of reproduction [as] sexual symbols, symbols of male and female, sometimes accompanied, sometimes not, by symbols of age — of youth and old age” ( 32, emphasis mine). Could this mean that the entire economy of modern global culture significantly depends on a cute notion of temporality for the perpetual renewal and replenishment of libidinally attached families — as the notion of “the family” is seen as the primary incubator that generates and re-generates seemingly natural power relations and structural economies? In other words, do cute spaces offer themselves up to quarters of efficiency?

Of course this social classification process that sorts individuals into various markets is necessarily reproduced in calendars that make time a fetish or object — as though the collection of these little objects — seconds, minutes, hours, days, months, years, decades, and so on —  can be somehow a/cutely contained within a single lifetime or within the span of a few generations. This sense of “legacy” is  absolutely necessary for the perpetuation of inherited class standings and all the subsequently naturalized social relations — namely labor markets —  that govern the ongoing reproduction of spatial practices in the way that we have come to re-cognize them as unavoidably True. Therefore, cute can be seen as a means of marking time through the sorting of populations.  Here’s where Marx’s conceptualization of time as material history really offers itself to an interesting critique of cuteness.

Actually, if you think about it, cute kitten calendars are a literal extension of this idea. Every single month we face a brand new pay/billing cycle with a furry little friend to help us keep track of it all. 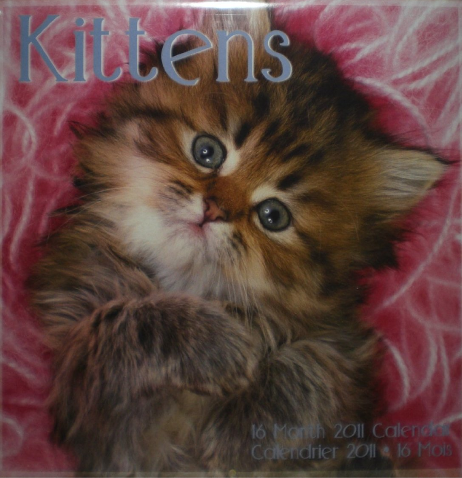