Barack Obama started 2013 off with a new swagger. It began with the Fox News generated “Benghazi-Gate” and all the hullabaloo surrounding the non-nomination of Susan Rice for Secretary of State. From that moment, it seemed like he was down for a brawl with congressional Republicans during the first press conference after his reelection win, saying if the GOP’s leadership didn’t like the ambassador’s handling o 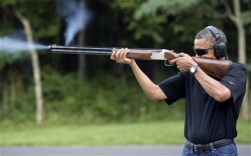 Then there’s the issue of Obama’s continued defiance in the face of House GOP members’ budget demands, which stands in clear contrast to his demeanor after the last fiscal crisis. And now with Obama’s more strident approach to gun control legislation following theNewton school massacre and other shooting incidents, there’s this recent revelation that he’s a skeet-shooting enthusiast…?

Dad jeans notwithstanding, it seems the world’s about to witness a gruffer, rougher, less cute second-term Obama. I also think the POTUS now feels less need to traffic in racial cuteness and is more comfortable moving toward a more formidable leadership image — and this could be a good thing on some level. (Not that I’m thrilled about gun sports or drone attacks or extra-legal assassinations or that sort of thing.)