Mike Huckabee says Republican presidential candidate, Herman Cain,  is “winsome” and George Will considers Cain’s run for office “cute and fun” but nothing to be taken at all seriously. Maybe so — maybe not, who really knows? To be sure, Cain is definitely a long-shot. 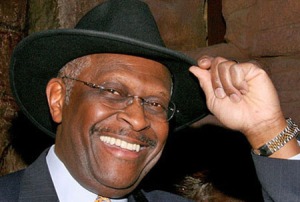 I would be interested to see if Herman Cain was included among the cohorts of Fortune 500 black CEOs whose physiognomy was determined as having a “baby face.” If  he was not included in the study, I’d be surprised.

Though, of course, everyone may not agree that Cain is cute per se —  regardless of partisan persuasion — you’d be hard pressed to find someone who will dispute whether or not Cain has shown himself to have been competent as a food service industry executive. And I think, regardless of one’s political views, most everyone would have to agree that Cain seems to have developed an unusually high skill set in terms of attenuating dominant perceptions of black male threat and really does possess an extraordinary ability to disarm others — even potential rivals. According to the study:

disarming mechanisms are beneficial to powerful Blacks because they reduce the perception of ‘threat’—whether threat is experienced as fear or intimidation due to an out-group individual possessing high levels of power (i.e., realistic threat), or as anger, resentment, or discomfort due to the perceived illegitimacy of a low-diffuse-status individual holding a hegemonic position (i.e., symbolic or ‘worldview’ threat)… [and that] there are numerous traits and behaviors that might function as disarming mechanisms, such as modifying style of speech or dress, adopting assimilationist ideologies, having a goofy appearance (e.g., big ears), smiling, or even ‘whistling Vivaldi’ (Livingston 1234).

Well, I think Barack’s got the whole “big ears” thing covered and the reference to Brent Staples‘s “Black Men and Public Space” essay about negotiating public space in Chicago as a large black man. Staples  Staples admits at the very end of his essay how “warbling bright, sunny selections from Vivaldi’s Four Seasons is [his] equivalent of the cowbell that hikers wear when they know they are in bear country.”

Cuteness as a quirky racial construction in American politics and civic life as related to Cain’s Republican presidential candidacy is a fascinating little political story to follow. Oh yeah, and as for the political catch-phrase fail of the moment: